Someone needs to talk to Jeff Holland. 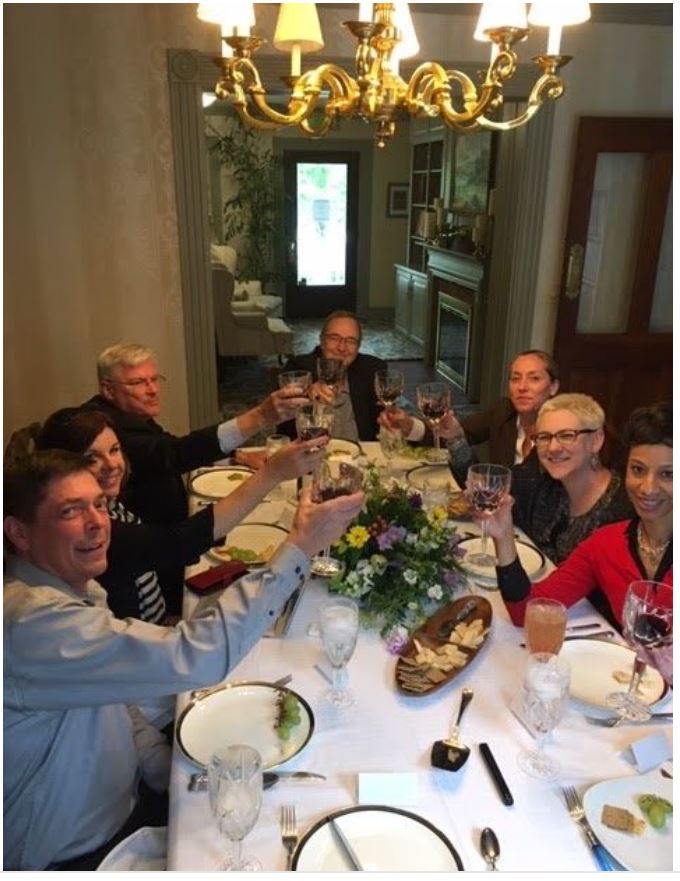 No, really, he wants people to talk. The newest member of the Leadership Medina County board hosted the first ever “Jeffersonian Dinner” last month and he wants to keep the momentum going.

“It was terrific start,” Jeff said. “What’s missing in society is people having honest, respectful conversations.”

The dinner, organized by Executive Director, Colleen Rice, and hosted at the offices of Holland & Muirden, brought together a group of Medina County citizens to break bread and talk. Not about those “safe” topics we all lean into: the weather, work, more weather, our children, and how about that weather? No, they talked about real stuff. Polarizing stuff. Race, religion, politics, and that kind of stuff. The best part of it? These weren’t people who all agreed on the stuff. They had opposing views, and yet, they were able to enjoy a meal together and converse cordially. No evidence was given that people threw food, stormed out of the room, or tossed tables. They just talked.

“When people talk face to face, it creates community. It’s hard to demonize someone when you know them,” Jeff remarked.

If you know anything about Jeff Holland, you probably know that he is the “Holland” part of Holland & Muirden, Attorneys at Law (his wife, Maggie, is the Muirden part). You might also know that he has a passion for the land. He started a land conservancy group in 1991 that merged with the Western Reserve Land Conservancy and has, thus far, helped preserve 56,000 acres in NE Ohio. If you have seen him in action as a speaker, you know that he is enthusiastic, energetic, and charismatic.

So, how about some things you might not know? He is Medina County through and through, having graduated from Highland High School. He met his wife while they were both in law school at Franklin Piece School of Law in New Hampshire. They have four sons, three dogs, six horses, four cats, and a hive of bees. Animal welfare is a passion of his, second only to preserving land. Their law offices inhabit a gorgeous, historical home in Sharon Center that was built in 1847 and has previously been the postmaster general’s house, a lending library, a dry goods store, a doctor’s office, and a bed and breakfast.

When Jeff went through the Leadership (shout out to LMC Class ‘96), he found a new appreciation for a county he had grown up in.

“It was all new to me. Leadership Medina County represented ongoing education, bringing together all backgrounds, and unifying our community.”

Jeff Holland: If you see him, talk to him.

Being a board member is not a new position for Jeff. He previously served from 2011 to 2017.

“I am excited to welcome Jeff back to the Board of Directors,” said Rice. “He brings deep community knowledge, a passion for philanthropy, and the desire to envision an ambitious future for Leadership Medina County to meet Medina County’s growing needs.”

Undoubtedly, Jeff will bring an insightful perspective back to the board. And you can bet he’s going to want to talk about it!

Posted in Board of Trustees